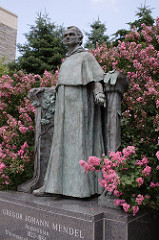 Gregor Mendel
Father of genetics, discovered genetics by studying pea plants
traits
characteristics passed from parents to offspring
heredity
the passing of traits from parents to offspring
genetics
the scientific study of heredity
chromosomes
located in the nuclues of the cell contains the DNA
inherited traits
characteristics that are passed from parent to offspring some traits are dominant and some recessive.
dominant traits
a trait that will always be expressed in the physical appearance of the organism, respresented by a capital letter like T.
recessive traits
a trait that does not show up unless the organism receives 2 recessive alleles, one from each parent, represented by lower case letters like t.
genotype
an organisms genetic makeup or allele combination like TT or Tt
phenotype
an organisms physical appearance or visible traits, like brown hair, blue eyes
DNA
located on the chromosomes in the nucleus of the cell, contains the genes
purebred or homozygous
an organism that has received 2 identical alleles, like TT or tt
hybrid or heterozygous
an organism that receives 2 different alleles, like Tt
genes
the factors that control traits, located on a chromosome, come in pairs
allele
different forms of a gene, or one gene from the pair
probability
the likelihood that a particular event will occur
Punnett square
a tool used to predict the outcome of possible gene combinations that an offspring will have based on those of the parents.
mutations
any change in the DNA that disrupts the normal cell cycle.
pedigree
a diagram of family relationships that can be used to trace traits that have been passed down or even genetic diseases
genetic disorders
caused by a mutation or change in DNA like downs syndrome, cystic fibrosis, sickle cell
incomplete dominance
when the dominant allele is partially dominant- so colors blend
codominance
when both alleles are expressed equally- so organisms are multi-colored.
Environmental influences
when genes or physical characteristics of an organism are influenced by the environment- temperature, nutrients, injuries, disease, exposure to sun, and living conditions
selective breeding
the process of selecting organisms with desired traits to be parents of the next generation.
Genetic engineering
genes from one organism are transferred into the DNA of another organism.
genetically modified
organisms that have had changes to their DNA using genetic engineering.

Gene (genetics) a segment of DNA that is involved in producing a polypeptide chain Allele Alternative form of a gene Trait A characteristic that an organism can pass on to its offspring through its genes. Read more…