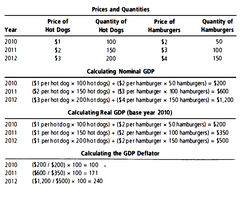 Intermediate vs. final goods
-To get an accurate GDP estimate and avoid double counting

-Finals goods are included in GDP
Intermediate goods are not

-Services are intangibles: an output that provides benefits without the production of a tangible product

Services as a Share of U.S. GDP
-Have risen steadily since 1960
– Minor fluctuations but it has an increasing long term trend
GDP Produced within a Country
-GDP includes only goods and services produced domestically, or within the physical borders of a nation
-Example: Nike is a US firm (owned by US citizens) that produces shoes in Thailand. The shoes produced in Thailand count as GDP for Thailand
Gross National Product (GNP)
-The output produced by workers and resources owned by residents of the nation
GDP has to be during a specific time period
-Don’t want to recount a good that was produced last year
-Has to do with double-counting again
4 Major Categories of GDP
1. Consumption
2. Investment
3. Government Purchases
4. Net Exports
1. Consumption
-The purchase of final goods and services by households, with the exception of new housing
Two Divisions of Consumption
1. Durable Goods
2. Non-Durable Goods
Durable goods
-Goods consumed over a long period of time

Non-durable goods
-Goods consumed over a short period of time

GDP also includes purchases by businesses that add to their inventories
-Inventories represent a stock of goods that firms can use to produce their product in the future. An increase in inventory allows the firm to make more and is an investment for the future.
3. Government Purchases
-Government purchases includes spending by all levels of government on final goods and services

Does NOT count
-Transfer payments, such as welfare or social security since when households spend this income, it will enter GDP as part of consumption or investment
4. Net Exports
-Net Exports are exports minus imports of final goods and services
-If imports > exports, then NX < 0
Is it bad that NX is negative?
-It seems to reduce GDP, but more imports means more goods and services for people in this country
GDP Equation
GDP= C+I+G+NX
Relationship of GDP(output) and Income
-Output and income are essentially the same (Output=GDP=Income)
-The output you produce is sold and you receive income for what you sell
-The more you produce, the more your income. Nations that produce a large amount of high-value output are relatively wealthy
Three uses of GDP Data
1. Estimate living standards across time and nations
2. Measure economic growth
3.Determine whether an economy is experiencing a short-run expansion or recession
1.Measuring Living Standards
See below
Total (Nominal) GDP
-When an economy produce more, the income is higher. This means that people can consume more, they can afford to go to college, they can travel more, etc.

-However the total GDP may not be an indicator of living standards for a typical person. Why?

-Does not adjust for population size of country

Per capita GDP
– GDP per person (GDP divided by population)

-Average living standards in a nation

-Used to evaluate GDP over time 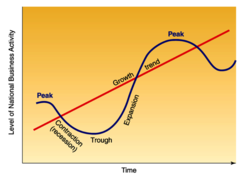 The Business Cycle, Graphically
Shortcomings of GDP
1. Nonmarket goods
2.Underground Economy
3.The Quality of the Environment
4.Leisure time
1. Nonmarket Goods
-Think about goods and services produced, but never sold, even though they create value for society

-Example: Wash your car is a service produced but not included. In contrast, if you pay someone else to wash your car, then, it is included

-Smaller in United States due to stronger economy and less corruption

3. The Quality of the Environment
-GDP is unable to distinguish how goods are produced
4. Leisure time
-GDP does not capture how long it takes to produce goods and services
-The more you work, the less the leisure time
Average work week
-South Korea: 46 hours per week
-Netherlands: 28 hours
-USA: 36 hours
-Japan: 36 hours

aggregate output the total quantity of goods and services produced (or supplied) in an economy in a given period of time. aggregate income the total income received by all factors of production in a given Read more…