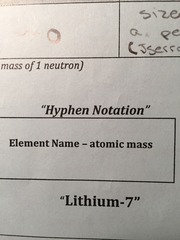 proton symbol
Radioactive decay or bombarding the atom
2 ways to change the identity of a nucleus
capture
left side
decay
right side
emission
right side
absorb
left side
strong nuclear force
The strongest of the four fundamental forces in nature. It holds the nucleus together. The attraction of the strong nuclear force is what keeps the nucleus from flying apart.
None of them. Although the slang term for a highly radioactive area or sample is “hot,” radioactivity cannot be felt, seen, or otherwise sensed without the use of radiation-detecting instruments.
Which of the five senses can detect radioactivity?
It’s impossible to change the rate of nuclear decay in a radioactive isotope. The rate of radioactive decay is not changed by any factors that usually affect chemical reactions, such as adding or removing heat, raising or lowering pressure, etc.
Name one thing you can do change the rate of nuclear decay in a radioactive isotope.
The atomic number goes up by one, which by definition means that it gains a proton and becomes a different element with a different atomic number.
What happens to the atomic number of an element when it undergoes beta decay?
Nothing. The mass number is the number of protons and neutrons.
What happens to the mass number of an element when it undergoes beta decay?
They are radioactive elements with atomic numbers greater than 92.
When is one a radioactive element?
Fusion must take place at extremely high temperatures
Why is nuclear fusion considered an impractical source of energy today?
nuclear fission reaction
When uranium-235 splits
True
Two nuclei of low mass would most likely undergo nuclear fusion
U-235
Which uranium is most commonly used?
True
250 radioactive
1100 isotopes
True
Kidney-Thallium
Thigh- Iodine
Brain-Hydrogen
Treat Cancer-Cobalt-60
Nuclear Waste
What is the one thing most people fear about?
REM
amount of radiation exposed to
RAD
amount of radiation absorbed to
RBE
relative biological effectiveness
Madam Curiy
Who discovered radiation?
Madam Curiy
Who discovered radium?