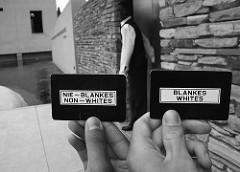 Apartheid
A former South African policy that segregated the country racially and economically and politically oppressed the non-white population. For example: Apartheid in South Africa.
Balkanization
The splitting of a large, multi-cultural state into smaller states, which often tend to be hostile towards each other. For example: The Balkan Peninsula.
Balkanized
The past tense of balkanization. A large region that has been divided into smaller regions. For example: the Balkan Peninsula.
Blockbusting
Persuading residents of a home or land into selling property at a lower price by giving them fear of minorities moving into the area.
Centripital Forces
A force that brings people together to support a state. For example: Nationalism.
Ethnic Cleansing
When a major ethnic group removes an ethnic group with less power to make a more homogeneous state. For example: The holocaust.
Ethnic Neighborhoods
Neighborhoods based with high concentrations of a single ethnic group.
Ethnicity
Social groups that share a cultural background. For example: Hispanics, Arabs, Europeans, Asians, Africans.
Ethnonationalism
Having pride of one’s ethnicity. For example: Dude that once said: “Yeah I’m black, you got a f****n’ problem, b***h? I’m proud of bein’ black, n****h, now get the f**k off my face before I knock yo a** to sleep.”
Genocide
Killing of many people belonging to a particular cultural or racial group. For example: the holocaust.
Ghettos
A part of a city in which Jews we forced to live. The ghettos in the holocaust.
Irredenta
A territory historically related to a particular social group but is controlled by another. For example: Jewish neighborhoods before and after the holocaust.
Irredentism
A political movement directed towards gaining back lost territory.
Multicultural
A culturally heterogenous state, where multiple cultures can be found and adversity is present. Example: New York City.
Multiethnic State
A state which houses multiple ethnicities and is ethnically heterogeneous. For example: New York City.
Nationalism
Being proud of one’s nationality or social group. For example: Fourth of July parades.
Nationality
The country to which one adheres or was born in. For example: English/British, American, Chinese.
Nation-State
A state which is typically curturally homogenous in terms of things like language.
Province
An administrative division of a country, like a state. For example: Roma Empire’s territories outside of Italy.
Race
A biologically related group of people with relatively more recent common ancestors than with other races. Things like skin color, eye color, size, hair color, etc., tend to be similar within people of the same race. For example: White, black, Asian.
Racism
Having distaste for people of a certain race. For example: everybody from southern states before the 1960’s.
Racist
Someone who has a distaste for people of a certain race. For example: everybody from southern states before the 1960’s.
Self-Determination
A principle in international law that states that each country decides its own sovereignty without international influence.
Sharecropper
An agricultural system in which a landowner allows the use of his or her land by someone in return for crops. These crops tend to be without external pay. For example: newly freed slaves unable to go anywhere once slavery was abolished, so they continued to work for landowners in return for a place of habitation.
Shatterbelt
An area in the middle of constantly colliding rival territories. For example: Indonesia.
Triangular Slave Trade
A trading system that involved America, Europe, and Africa, in which Slaves were taken from Africa and sold to America, where America would produce raw materials to sell to Europe, and manufactured goods would be given to Africa. This would be a great system if it didn’t involve something as barbaric and inhuman as enslaving people and selling them as property. For example: Triangular Slave Trade.

Chapter 1 Thinking Geographically globalization greater cultural and economic interaction among people all over the world geography The study of the earth and its features and of the distribution of life on the earth, including Read more…