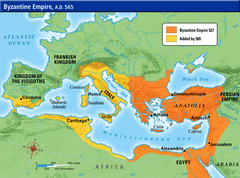 Byzantine Empire Map
Map
Nika Rebellion
-In 532 AD, fights broke out between supporters of different chariot teams(demes).
-Ultimately, those fighting turned their, hostility toward the emperor.
-They were angry about the highs taxes he had charged for territorial expansion.
-They chanted “Nika” which means win of victory.
Belisarius
Byzantine general who recaptured much of the Roman Empire. 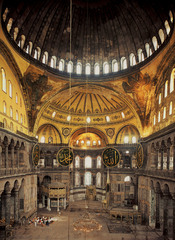 Byzantine Art/Architecture: Hagia Sophia
Built by Justinian, it contains one of most glorious interior spaces ever made by man. 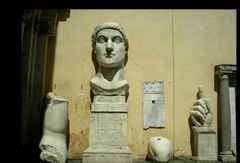 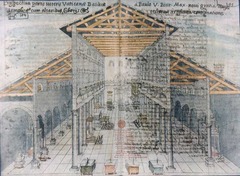 Byzantine Art/Architecture: Church of St. Peter’s
The 1st church. Based on Roman Basilica. Not truly Byzantine, but the roman basilica as a form would have a large influence on Byzantine churches.

Byzantine Art/Architecture: The Church of San Vitale
Ravenna, Italy; 528-547
-Roman Elements: the dome, shape of the doorways, and stepped towers.
-Byzantine Elements: polygonal apse, narrow bricks, and mosaics.
***The church is of extreme importance in Byzantine art, as it is the ONLY MAJOR CHURCH FROM THE PERIOD TO STILL BE INTACT TO THE PRESENT DAY. 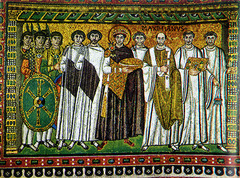 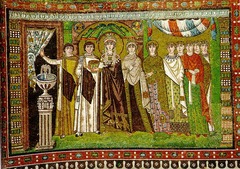 Byzantine Art/Architecture: Dome on Pendentives
The dome on pendentives was a major innovation and produced the largest dome in the world at the time.

Byzantine Art/Architecture: Icons
Religious figures painted for veneration. This one is a bust of the savior, 6th century AD. This icon painting(before iconoclasm) shows the influence of classical art. 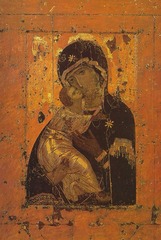 Byzantine Art/Architecture: The Virgin Eleousa of Vladimir
(12th c.) One of the best examples of the Byzantine Iconography.
Byzantine Art/Architecture: Double-Faced Enkolpion
A devotional pendant or medallion meant to be worn around the neck. One face of this pendant bears an image of Christ and the other that of the Virgin.
Byzantine Art/Architecture: St. Basil’s Cathedral
Red Square- Moscow, Russia
Demonstrates Byzantine Influence mixed with native Russian.
The Iconoclastic controversy and Leo
-Initiated by Emperor Leo in 8th c. A.D.
-Worship of icons seen as idolatry
-Appropriation of Church wealth by emperor
-Destruction of Byzantine art form
-Back to status quo in ninth century
Effects of Iconoclasm on the West
-Iconoclasm damaged relations between Byzantines and Christian West – Pope against iconoclastic movement
-Western Christianity turned away from Byzantines and to the Franks for support
4th Crusade sacks Constantinople
-1081-1204 CE
-Call to West for help versus Seljuk Turks
-Constantinople base for operations
-Sack of Constantinople 1204 – Fourth Crusade
The 1054 Schism
Roman Catholic v. Eastern Orthodox
Leaders: Pope(West) and Patriarch(east)
Language: West: Latin and East: Greek
Authority: Pope’s interpretation of the Bible(West) and The Bible(East). Pope was above all government and local laws(West) and Political Leaders above all(East)
Divorce: Western pope forbid divorce and Eastern Patriarch began to allow divorces
Priests right to marry: West: Restricted and East: Allowed
Filioque: West believed that the Holy Spirit was begotten of the Father and the Son while the east believed that the Holy Spirit was begotten of the Father alone
Use of Unleavened bread: the West used unleavened bread for communion while the East used leavened bread.
***EFFECT: Christianity was permanently divided between Roman Catholic (in West) and the Orthodox Church (in East).
Attacked by Arab armies
empire loses much land but Constantinople never falls (Greek fire), acts as buffer between Islam and Europe
Byzantine Empire Falls
-1261-1453
-Territories lost to Ottoman Turks
-Commerce dominated by Italian city-states of Venice -and Genoa
-The Black Death in 1300’s
***1453 – Constantinople fell to Ottoman Turks
Kievan Russia(860-c.1450)
:
Geography of Russia
-West of Ural Mountains
-Black to Baltic Sea
-Grasslands in the South, dense forests and swamps in the north.
-3 Great Rivers: Dnieper, Don, and Volga.
Birth of Russia
-Before 800 AD, the forests and grasslands were inhabited by farmers and traders without any political unity
***Slavic people influenced by Vikings, Byzantine Empire, and the Mongols
Influence of the Vikings
-The Vikings influence these groups to begin to build forts along the rivers and the Vikings settled among the Slavic peoples
Influence of the Byzantine Empire
Alphabet (Cyrillic-St. Cyril and Methodius), Art and architecture (icons and domes), Religion (Russian Orthodox, Vladimir’s conversion)
Yaroslav and his influences
In 1019, Yaroslav (Vladimir’s son) came to power
Increased trade with Europe
-Built many churches
-Created a legal code
-Married his daughters & sisters to kings of surrounding nations
***Ties to Constantinople = wealthy and powerful Kiev
The Weakening of Kiev
-In 1054 Yaroslav dies
-Divides the empire amongst his sons which weakens the empire
-Trade disrupted by the Crusades further weakens the empire
Influence of Mongols
Forces Russia to turn Eastward, Centralized autocratic leadership
-Allowed religious freedom as long as they were paid large amounts of tribute (taxes)
-Increased trade – part of a large empire
-Isolated women into separate quarters
-Absolute Power – model for later Russian governments
-Cut Russia off from the Western advancements
Rise of Moscow and the Czars (Tsars): Ivan III and Ivan IV
Ivan III:
1. Defeated Mongols in a bloodless battle
2. Removed Boyars (landed classes) from power and began using the title Czar (Caesar)
3. Declared the Russian Empire to be the Third Rome

Michael Romanov
-The Romanov dynasty is established.
-The only Russian royal family lasted for 304 years!
The Dark Ages(400-750)
:
Germanic tribes settled throughout the Western Roman Empire (especially the Franks)
1. German invasions destroy the Roman Empire
2. Most people remained in the village of their birth
Clovis and his conversion to Christianity
1.Clovis – Frankish leader
-Becomes a Christian
-Leads to increased ties to Church
-Gains more power for his tribe
-Frankish kingdom grows
-ruler of the Merovingian dynasty
Isolation, decline of trade, loss of learning, and horrible conditions
1. Money no longer used
-Decline in Trade
2.Most people remained in the village of their birth
-No more cities
-Decline of learning
-Loss of common language
-No central government
World of Charlemagne(750-850)
:
Charles Martel aka “the hammer”
1.Becomes Frankish king after Clovis – given title “mayor of the palace” in 714
2.He begins the Carolingian dynasty which replaces the Merovingian family’s rule.
3. ***Defeats the Muslims at the Battle of Tours in 732 A.D.***
-Europe will be Christian, not Muslim
Pepin the Short
1. He became Mayor of the Palace in 741.
2. In 751, he had himself appointed king with papal consent (consent of the Pope).
3. He started an era of very good relations between the Franks and the Church.
4. He gave the pope land he controlled in Italy, the area around Rome to become the papal states.
Charlemagne
***”Char le magna” = Charles the Great
1. Becomes king upon his father’s death in 768.
2. Early reign was spent at war with the Lombards, the Saxons and the Muslims.
3. Greatly expanded his territory into what is now Italy, Germany and Spain.
4. Most of western Europe was included in the new empire.
Charlemagne cont.
***In the year 800, on Christmas, the Pope crowns him***
1. “Emperor of the Holy Roman Empire.”
-This increases tensions between the West and the Eastern Orthodox Christianity of the Byzantine Empire and ESTABLISHES THE POWER OF THE CHURCH IN POLITICS.
2. Charlemagne works closely with the church to set up a Christian Empire.
-He helps convert, often by force, many barbarians to Christianity.
3. Divides his empire into regions, each ruled by a noble called a count.
-***To keep control of the counts and watch over the empire, he sends out his officials called missi dominici.***
Charlemagne cont.
1. Stressed education
-Set up many schools. The largest was at his palace at Aix-la-Chapelle aka Aachen
2. Tried to bring back a classical education for the upper class.
3. Had scholars work on copying the Bible and other great Christian and Roman works.
4. Public works included roads and churches as well as schools which helped to unite the empire.
5. Charlemagne died in 814 leaving his empire to his incompetent son.
6. ***Within 30 years, his empire would be split into 3parts by his grandsons at the Treaty of Verdun.
7. Europe regresses backwards again***
8. However, Charlemagne sets an example for all future kings and emperors of the Middle Ages.
A time of Invasions(800-1000)
:
Magyar invasions
Invasions from central Europe (Hungary), and continued Muslim invasions from the south.
1. In 1240, the Mongols attacked Kiev.
2. Led by Batu Khan (Genghis’ grandson)
3. Mongols would rule Russia for 200 years.
4. This was called the Khanate of the Golden Horde
Viking invasions
Invasions from Scandinavia ravage coastlines and cities along rivers throughout Europe.
1. The fierce and destructive Vikings destroy any European unity and force further isolation, however they do help stimulate trade and exploration as well as setting up colonies. Viking longships
Viking colonization and exploration
1. Legend says that a Viking chief named Rurik was invited to be king.
2. He founded the city of Novgorod, Russia’s first important city.
Feudalism and Manor System(800-1100)
:
The relationship between a lord, vassal, and a fief, and the social and political hierarchy of feudalism
1. King gives lord (vassal) a fief (land).
2. In exchange, the lord (vassal) gives the king his loyalty and protection (military service) when needed.
The establishment of feudal estates and manors, and how the lords took power away from the king.
Lords gradually became more powerful than kings as they acquired more land
The manor-system
an economic system where land, not money, is the basis of wealth
Manor
1. The lord’s estate including the town, peasant houses, church, and fields
2. It was self-sufficient, which led to a decline in trade
3. Three-field system
-two fields planted, one left fallow (empty) to regain fertility
The Roman Catholic Church(c.400-c.1100)
:
The hierarchy of the church from Pope to Priest
1. Pope
2. Cardinals
3. Archbishops
4. Bishops
5. Priests
Sacraments, tithe, canon law, excommunication, and interdict.
-7 Sacraments: Baptism, Confirmation, Eucharist, Penance, Anointing of the Sick, Matrimony, and Holy Orders. The purpose of the sacraments is to make people holy, to build up the body of Christ, and finally, to give worship to God.
-Tithe: 1/10 of annual produce or earnings, taken as a tax for the support of the church and clergy.
– Canon law: law, especially (in the Roman Catholic Church) that laid down by papal pronouncements.
-Excommunication: an institutional act of religious censure used to limit membership in a religious community or to restrict certain rights within it, in particular receiving of the sacraments
-Interdict: an authoritative prohibition
The life of monks under Benedictine rule and monasteries, and importance to preservation of classical learning
1. Monasteries
-Christian religious communities for men
-Cut off from outside contact
-Spend time praying and copying Roman and Greek books and the Bible
-***The Catholic Church is the only place where reading/ writing and centralized order continues during the Dark Ages
Growth of papal state
1. Church becomes involved in politics.
2. Pope’s palace is the center of government in parts of old Roman Empire.
-The Vatican
3. Church raises armies, repairs roads, helps poor, and negotiates peace treaties
4. *The idea of a churchly kingdom, ruled by the pope, would become a central theme of the Middle Ages.

Gallows Wooden frame for hanging people, usually criminals Ducking Stool Victim was tied to a chair which was elevated or lowered by the torturer. Pillory a wooden instrument of punishment on a post with holes Read more…