Give 3 reasons for studying Literature.
1. We are caretakers of God’s creation
Psalm 24:1 “The earth is the Lord’s and everything in it. ”
Everything is God’s even literature.
2. It helps us learn about others.
Allows readers to understand others.
“Love your neighbor as yourself.”
3. Brings us pleasure.
Eccelesiastes 3:1 “There is a time for everything and a season for every activity (even literature) under heaven.”
How did the story Kaffir Boy demonstrate a purpose of studying literature?
We learned what life was like for African Americans in South Africa.
What does indefatigable mean? (his grandmother was described this way)
Untiring
Share about the story Kaffir Boy
Granny works for Mrs. Smith as a servant. Her grandson comes to work with her and meets Master Clyde (Mrs. Smith’s son). Mrs. Smith gives Granny Clyde’s old books and clothes for her grandson.
What is a myth?
A traditional story that explains a belief, custom or natural phenomenon. (creation or death)
What is an origin myth?
A myth that explains how the earth was created. 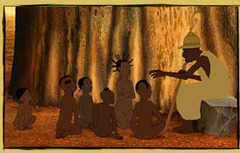 affiliated associated, connected I am very closely affiliated to the organization because my mom is the president of the company that runs it. ascertain determine It was difficult to ascertain the correct answer to the Read more…

Allegory A story in which ideas are represented or personified as actions, people, or things. Alliteration The repetition of the beginning consonant sounds through a sequence of words. Allusion To make reference, either implied or Read more…

What is a mythic hero? Remarkable birth or childhood. Offspring of God + human being so possess qualities of immortals and mortals What is a folktale hero? Ordinary person but exceptionally kind, clever, or resourceful. Read more…